Brian was so inspired by Dennis's headcam, that he just had to go out and get one for himself.  Here's a little music video I put together with some of his footage from this past weekend:
Can't wait until the next weekend of fun!!
Posted by AshleyS at 8:00 AM 2 comments:

I'm so glad our friend Dennis wore his head cam for Clayton's motorcycle ride!  If you listen closely, you can hear Clayton laughing and squealing most of the trip . . . we are so thankful that others love spoiling Clayton with fun as much as we do.  :)
Posted by AshleyS at 12:00 AM 3 comments: 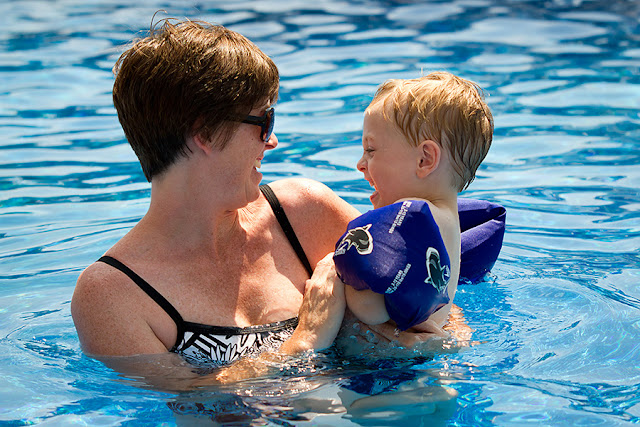 Memorial Day is always a great way to start off the summer.  And with my birthday being in late May, it's always a bonus when it falls on the actual holiday.  We spent our days this weekend with family and friends at the lake and poolside.  Great times and lots of fun in the sun!  Can't ask for a better way to spend our days off!
Posted by AshleyS at 12:00 AM No comments:

In memory of those who have served, and fought the good fight . . . 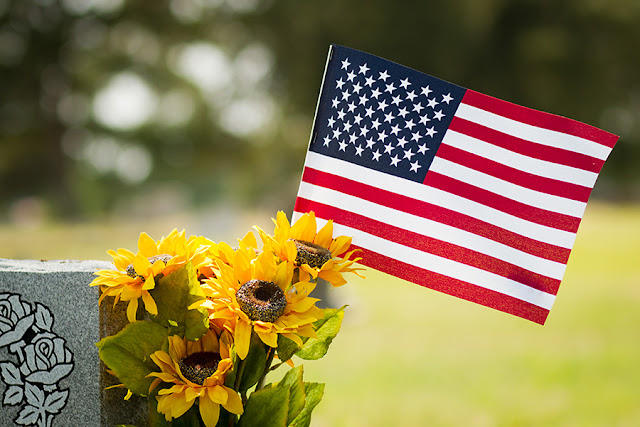 I have never been able to think of the day as one of mourning; I have never quite been able to feel that half-masted flags were appropriate on Decoration Day.  I have rather felt that the flag should be at the peak, because those whose dying we commemorate rejoiced in seeing it where their valor placed it.  We honor them in a joyous, thankful, triumphant commemoration of what they did.  ~Benjamin Harrison
Posted by AshleyS at 12:00 AM 1 comment: I am thankful that Jackson is willing to let me take his picture now, but I often wonder about his choice of poses.
Posted by AshleyS at 12:00 AM No comments: 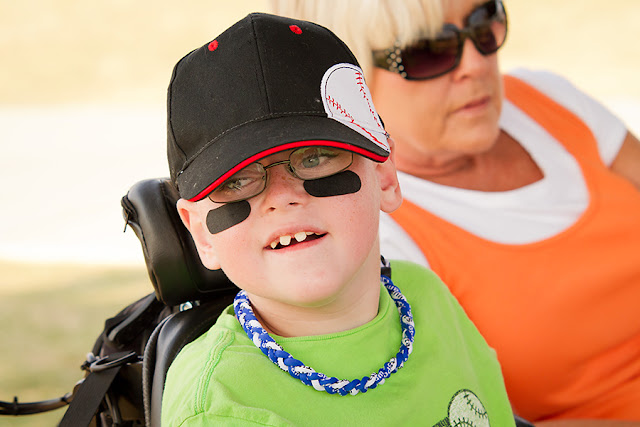 We've been spending a considerable amount of time at the ballpark lately, watching my nephew play some good baseball.  Clayton absolutely loves the excitement and watching all of the people.  But he couldn't just show up and not look the part . . . gotta have the hat (like any good ballplayer would), gotta have the necklace (which is *the* going thing for ballplayers these days), and of course he had to have the tape under his eyes to block the sun.  He may not be able to play regular league ball, but he isn't going to let that stop him from looking like a ballplayer--he's definitely NOT a benchwarmer!  :)
Posted by AshleyS at 12:00 AM No comments: 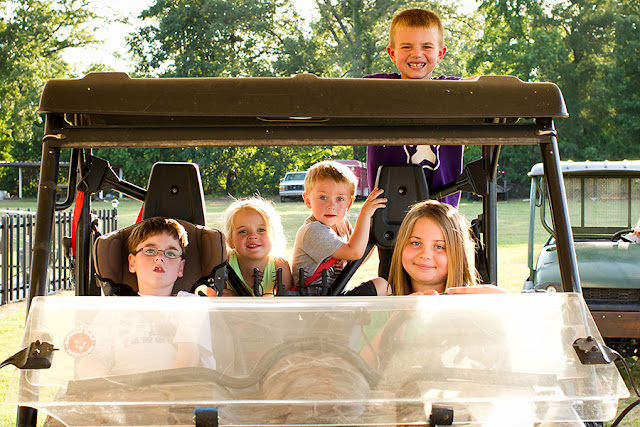 Growing up, my cousin were my best playmates.  I'm glad this is becoming true for my own kids as well. 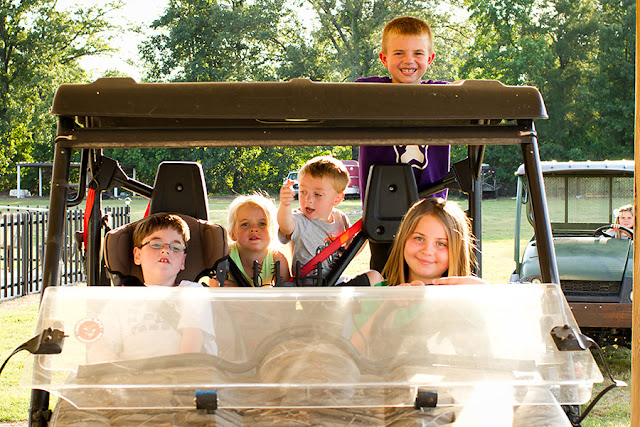 (You see that Jackson was "helping" me by telling Clayton to look at the camera . . . forever bossy--wonder who he gets that from?) 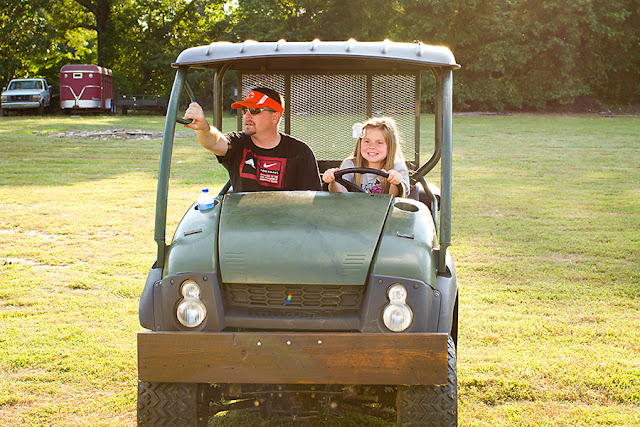 Heidi wasn't left out.  She chose to do her own thing, which is quintessential Heidi, of course! 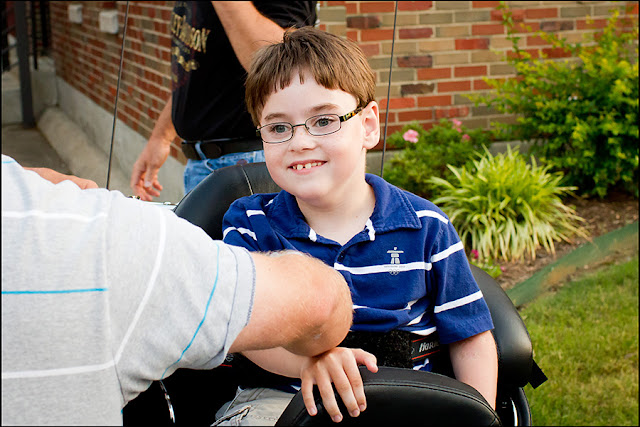 This child has so many people that love him.  And because of those people, he gets to do all sorts of fun and interesting things.  It blows my mind how generous people are with their time and resources when it comes to Clayton, but it reminds me time and time again how special he really is. 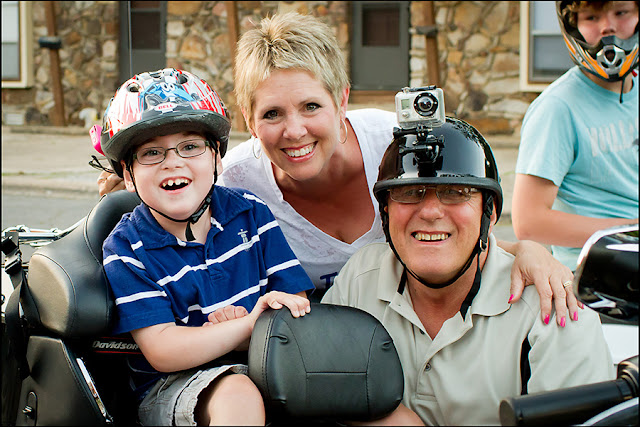 Dennis and Terry are some of those people.  They ride Harleys and Clayton has been able to sit on Dennis's bike, but he hasn't gone for a ride, simply because his particular motorcycle doesn't have the seat that could support Clayton.  But Dennis was determined to get Clayton a ride "around the block" (as Clayton always puts it), so he took it upon himself to hook Clayton up with one of his biker buddies. 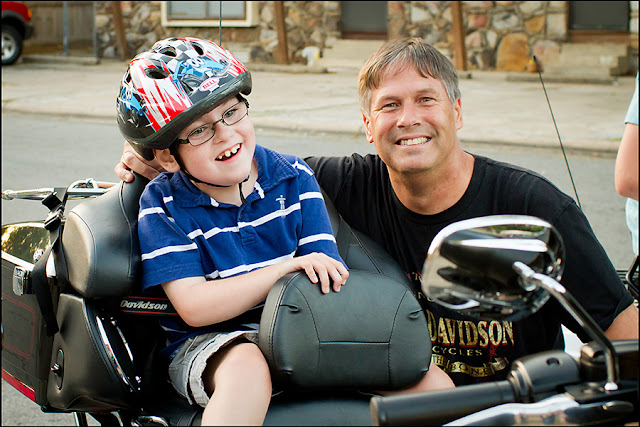 Steve didn't even know Clayton, but he took time out of his schedule last night to come by the church and give Clayton a ride on his "mokercycle" as Clayton says.  :)  Clayton was all smiles and squealing with delight as they pulled out of the alley--he was having a blast! 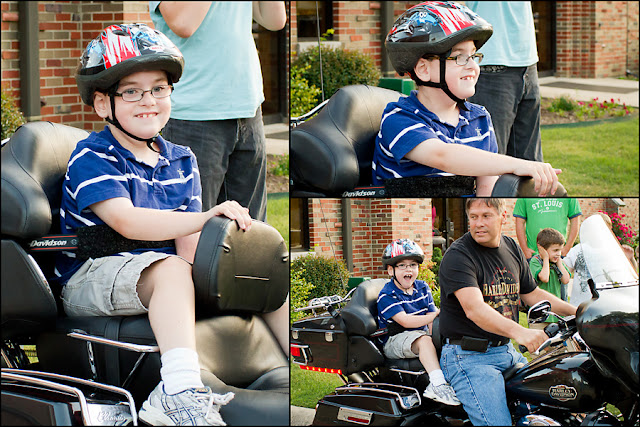 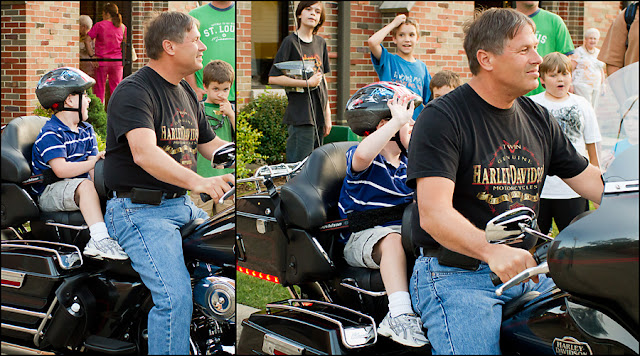 Dennis videoed the ride (that's a pretty neat contraption on his helmet, eh?)--I hope to share that video soon . . . but I couldn't help but go ahead and share these pics of one very happy boy.  Thank you, Terry, Dennis, and Steve for making Clayton's day--and in Clayton's words:  "do again sometime??" 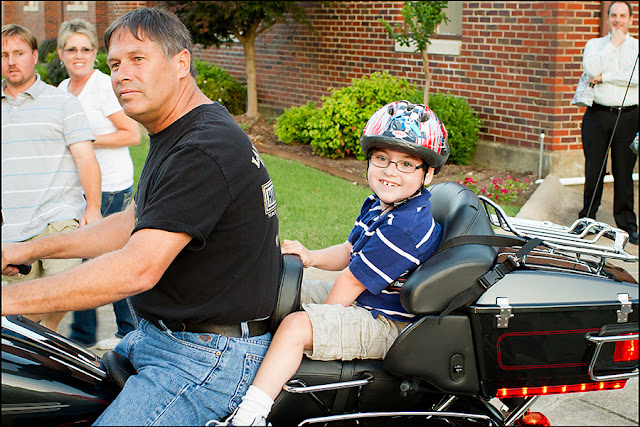 My short video as they are arriving back: 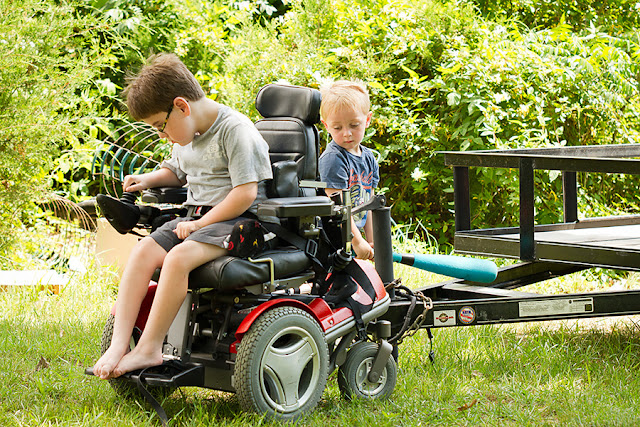 When Brian has his trailer out back, I can guarantee one activity that Jackson and Clayton will be involved in:  backing up.  Whether it be in the gator or the power chair, they have to back up in order to "hook up" to the trailer. 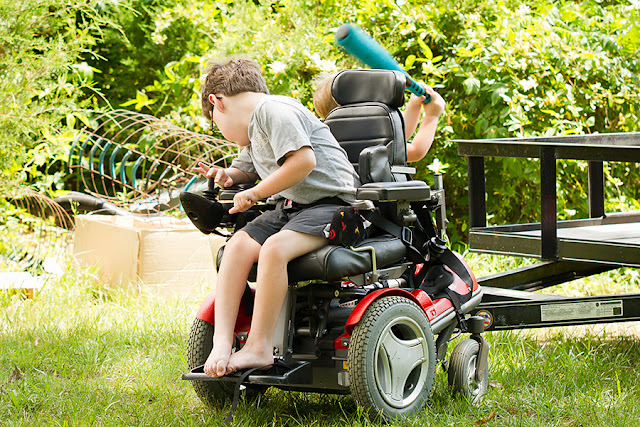 And Jackson has discovered the trailer is good for something else as well--something to hit that he won't be in trouble for hitting.  Since he has reclaimed his baseball toys, he has decided that hitting anything and everything in his path is fun.  Of course this causes me much unrest, because I'm constantly taking the bats away or punishing him for hitting something other than a ball. 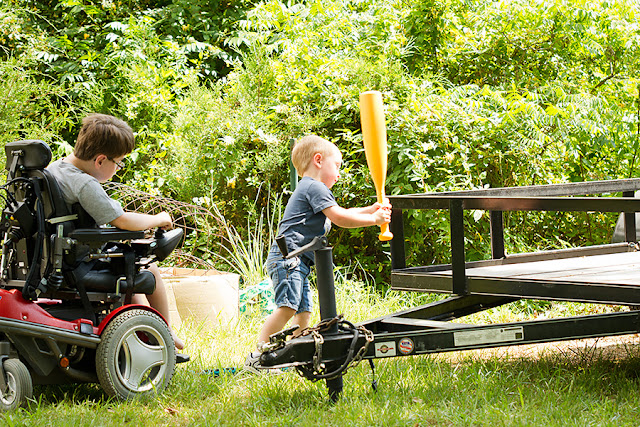 But the trailer seems pretty indestructible when put up against a plastic or foam bat, so I let him have it when we're outside. 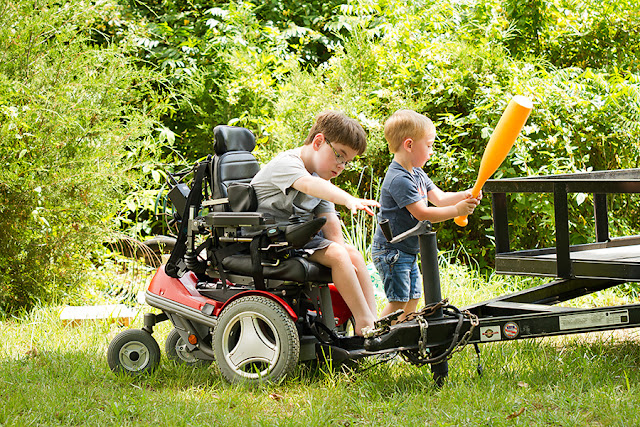 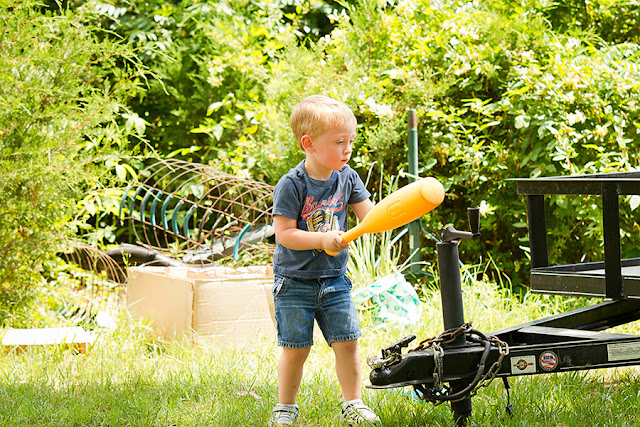 It's so funny to watch them and their little boy ways.  Not to mention watching them play together. 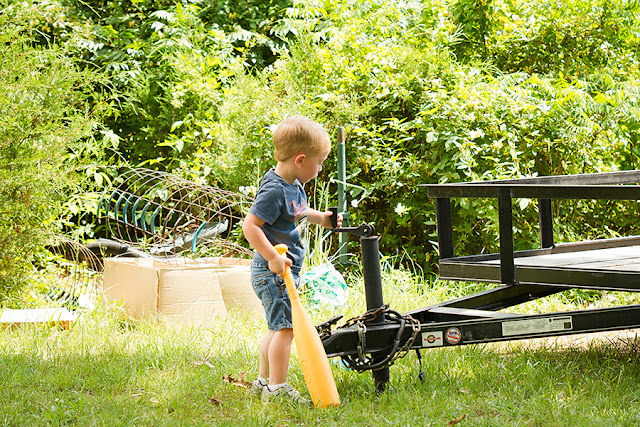 Clayton's O.T. has figured out how to use his love of home movies to motivate him.  She videoed him today as he went through his feeding therapy.  He is very into watching himself on the screen, so he got to do so on the phone's screen while it was actually taping him, and then again when she played it back for him.

It is in absolute miracle how far he has come.  This is the child who at one year old would nearly gag at the sight of others eating soft foods like the yogurt he licks on here.  His oral aversion was so severe, he couldn't even stand to have his own hands near his mouth.  What an answer to prayer to see him touching  foods to his tongue!  He has come so far--I'm hoping at this rate, he'll be able to eat a bite or two of cake on his sixteenth birthday!
Posted by AshleyS at 12:00 AM 4 comments: