Over the last few months, I have noticed a big change when lifting Clayton.  HE IS GETTING BIGGER.  Doesn't take a rocket scientist to know this is happening over time, but this latest spurt of growth has happened very quickly.  Prior to this summer, he had been on the same caloric intake for about three years.  But given what we think were some low blood sugar episodes that randomly happened in the afternoons, I decided to increase that amount just a bit, hoping to help his body keep his glucose level regulated.  And then, BAM!  Here come the pounds! 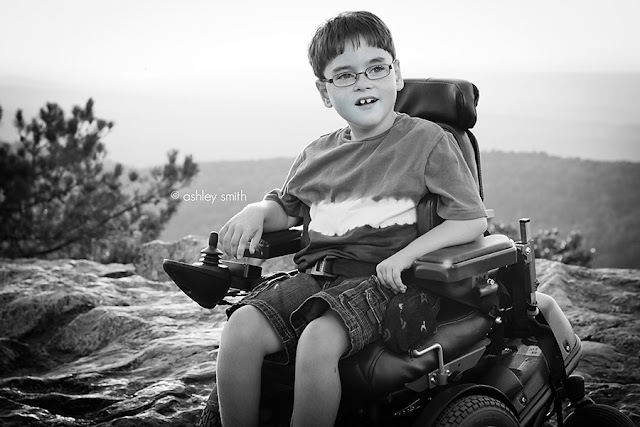 You don't see it much in this photo, but he has put on plenty of weight around his middle (standard for chair-bound folks).  And since we were at the doctor yesterday (for other things), I had them get a good weight and height so we would know exactly where he was on the growth chart.  For starters, he has gained 11 pounds since this time last year.  That's a big weight change for a little guy his size!  For weight at his age, he is at the 35th percentile.  For height at his age, he is at the .06th percentile.  As in POINT O SIX--as in LESS THAN ONE.  This means his weight for height is in the 93rd percentile!  (He weighs more than 93% of other nine year olds his height).  A little chunky to say the least!!  I'm going to be seeing a nutritionist next week at one of his appointments and you can bet I'm going to be asking her how I need to adjust his diet.  I realize that he is going to grow, but I need him to grow UP, not OUT!  I hate to regulate his eating, but a person who is a total lift has to maintain some sense of healthy body weight/height ratio so that his lifters can actually keep lifting!

At any rate, 99.4% of all nine year old boys are taller than Clayton.  Given his paternal gene pool, I don't think anyone is surprised.  :)
Posted by AshleyS at 12:00 AM No comments:

I mentioned last year that one of my goals as photographer was to eventually give back to my community by serving as a photographer for Now I Lay Me Down to Sleep.  This goal is still never far from my mind.  I still have a few technical things to become proficient at (such a high stress situation will demand me knowing my equipment inside and out), and I've got to prepare myself emotionally for actually putting my name out there as a volunteer.  Time will bring these things, but in the meantime, I continue to sing the praises of this wonderful organization.  The gift these photographers give to parents is absolutely priceless.  In some instances, a literal "lifetime" of images is given to the grieving parents of these children.

When I saw this video, I knew I had to share--I want to keep telling the world how important it is (not disrespectful or shameful) to photograph these little ones who will never have those regular milestone moments photographed as they grow up.  My photos of Shawn (even if they are just snapshots) are precious to me--proof that he lived and breathed and touched those around him.

The last family featured in this tribute is the family of Teegan.  Her mom had just signed on as a photographer for NILMDTS and would have never guessed that her first session for them would be her own baby.

~There is only one beautiful child in the world, and every parent has it~
Posted by AshleyS at 12:00 AM 1 comment:

The Year of the Extra-Curricular Activity

With the dawn of this school year, we have added a few new things to our weekly agenda.  We have our work cut out for us when it comes to keeping up with this new schedule.  In addition to our regular school activities and Clayton's therapy, Clayton is now attending an art class and "acting" class (more to come on this later--it is a program run by occupational therapists).  He also has his regular hippotherapy and church activities to keep up with (including Bible quizzing).  I'm hoping his stamina holds up to all this running around and long days ahead, because I feel like these new arenas will push him out of his comfort zone in a good way. 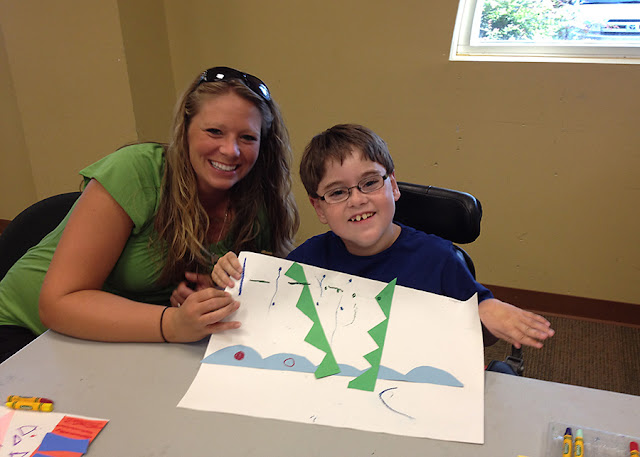 The art class has already met twice and it has been quite the ordeal getting Clayton to participate.  His helper just graduated from O.T. school and she is getting a crash course in sensory issues!  The first week Clayton gagged several times because another child was using glue.  The second week he was supposed to draw lines and it was a battle since he doesn't like the feel of the crayons in his hand.  You can see that she got him to connect the dots after much begging and [eventually] bribing. 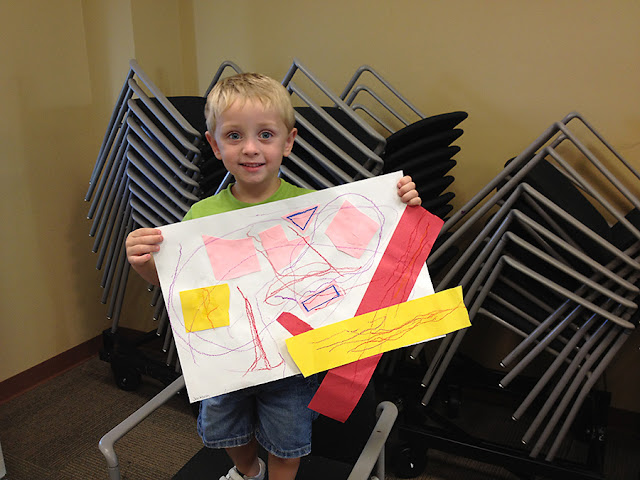 Jackson must have looked lonely because the teacher is letting him participate as well.  He didn't have any trouble putting his artistic vision down on paper.  (I just wish he would quickly pass out of this fake smile phase he is in!!)

**sorry for poor iphone pics--maybe I'll take my big girl camera to the class before the semester is over.  :)
Posted by AshleyS at 12:00 AM No comments:

Clayton's speech therapist often has students interning with her each semester.  And when Clayton meets these new therapists, he immediately turns into The Most Perfect Little Speech Student Ever.  (It doesn't always last throughout the whole semester!).  Yesterday, when Ms. Adrienne introduced him to her new helper, she asked him to introduce himself.  He obliged by telling her his name (and even how to spell it), told her all about Ms. Adrienne's family, and even told her about his own family.  His mom, his dad, and his brother Jackson, and his brother Shawn.  He told her that Shawn was real sick.

People often ask me if Clayton knows.  I guess they want to know if he really gets it . . . if he gets the whole story.

I think in his own special way he does.  When he woke up on the morning of the 28th, he immediately asked me to take him to the hospital.  He has NEVER woken up with that request!  I asked him if he had dreamed about the hospital and he simply nodded yes.  I think he is more in tune to his history and the miracles therein than we could ever fathom. 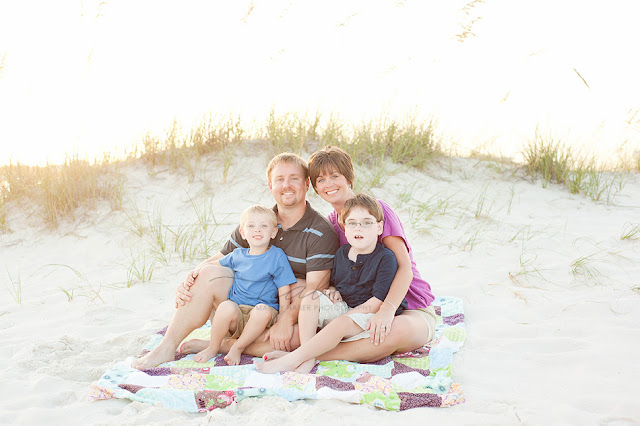 So when you see our family photo, you might only see four people.  But Shawn is there.  His imprint is on the story of our lives, and his spirit weaves in and around us always.  And our love for him radiates as we choose to honor him by moving forward in life.  Love that Clayton definitely understands.

**Photo courtesy of Mandy Haber Photography.  Thanks, Mandy!!
Posted by AshleyS at 12:00 AM 2 comments: