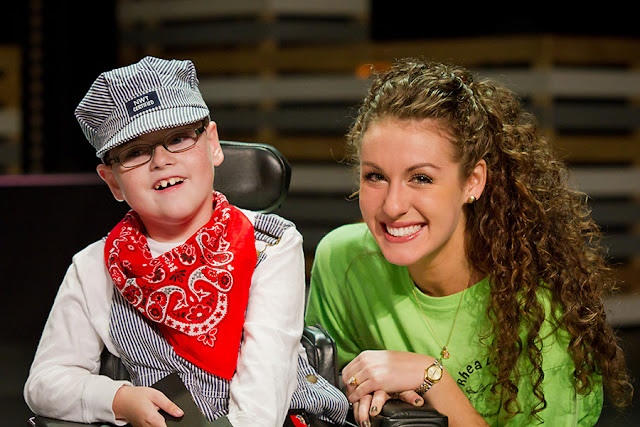 It doesn't matter where Clayton goes,  he seems to have a knack for wrapping the ladies right around his finger.  It was no different with his helper for his play.  Kori (hoping I'm spelling that right) was a little worried at the first practices when Clayton wasn't very interactive.  She quickly learned that he was just taking it all in, because when he finally decided to participate, he went all out.  He spent most of his time trying to flirt with her (those little cartoon hearts were beating out of his chest when he was with her),  and ALL of the time trying to make her laugh.  He can't wait to see her next semester for their next adventure in the performing arts!
Posted by AshleyS at 12:00 AM 2 comments:

This was Clayton's first year to participate in ACTS, Jr:

ACTS Jr. is a unique, creative program designed to integrate children ages 7-17 with and without disabilities together through the use of performing arts. Led by occupational therapists, occupational therapy students, and youth volunteers from the community, this program is unique to Arkansas. ACTS Jr. has touched the lives of numerous children and families in Central Arkansas since 2005.

We've looked forward to his debut play for the last few weeks, as they've met each week for practice.  He was given just a couple of lines to say, and as I expected, he ended up doing his own thing instead.  It really didn't matter, because he'll do anything to get a laugh, and that is exactly what he did!

For a little background on the play (the kids help write the entire script!):  Four local shops were chosen to be highlighted and Rhea Lana's consignment shop was one of them.  This was Clayton's group.  For our friends that aren't local, Rhea Lana's is a huge biannual consignment sale for moms.  It's become so big that there are several locations across the state.  Enter Clayton.  He was the engineer of the train that went to some of these locations to pick up items to be sold.  He was supposed to clear the items and then say "All Clear! Welcome Aboard!"  But as you'll see, he didn't exactly do that.  (You'll have to ignore the laughter from his mom during the video--I couldn't help myself.) :)
The entire play was an absolute blessing!  Seeing so many kids overcome their disabilities to play their parts is so inspiring.  I can't wait until their spring show and what's in store for Clayton in the performing arts realm!
Posted by AshleyS at 9:00 AM 4 comments: