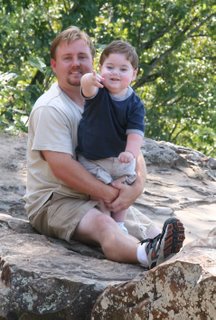 We went for a family drive today. It was a really nice day, but it was a bit warmer than it has been--glad we weren't doing in hiking or anything. Wouldn't want to actually break a sweat! :) So for those of you who don't live around here and wonder what Arkansas looks like, I took these pictures for you. (It was a bit hazy, but you can get a general idea). These were taken at the top of Petit Jean Mountain, which is located in the foothills of the Ozark Mountains. Only about a 30 minute drive from our house. We also went to Mt. Nebo which is a little farther northwest, and it's quite a bit steeper than Petit Jean. Now to people who have seen the Rocky Mountains, these really only qualify as hills, but for us, they will do. It really is refreshing to get out and drive in the country. I can't wait to go back when the leaves are actually changing. Driving through the Ozarks during the fall is beautiful. Hoping we get a chance to go back soon. 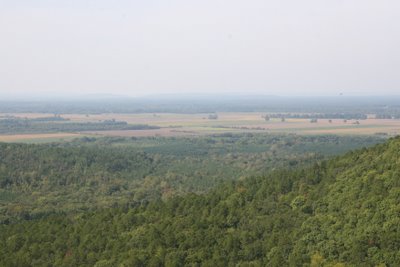 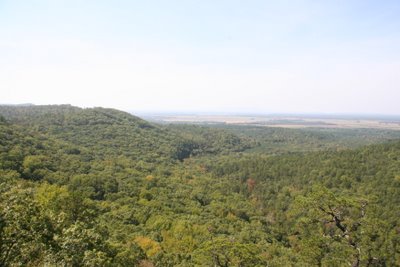 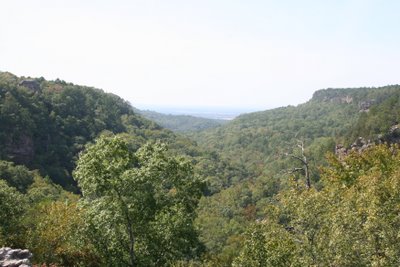 I've been blogging for several months now and I've noticed my readership has grown by leaps and bounds!!! Never thought I'd be that interesting! Let me know you're out there by leaving me a short comment . . . just a quick shout out!
Posted by AshleyS at 11:09 PM 14 comments:

I must pat myself on the back--I've been completely free of anti-depressants for over a month now and I'm doing pretty well. I was scared I couldn't make it without a crutch, but these past weeks have been very stressful with starting the magazine and I'm still not breaking down. Feels good to be half way normal now. This beautiful weather helps TONS too!
Posted by AshleyS at 5:12 PM 5 comments:

Here's one of my newest layouts: 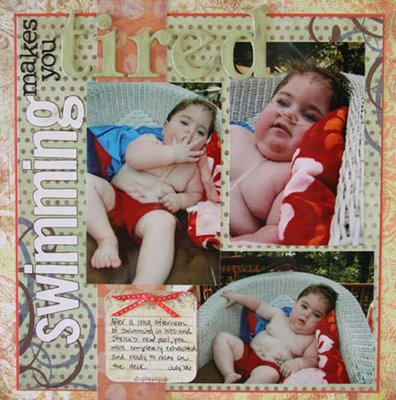 Our website for the magazine went live today!
Check it out!
Classy Scrapper Magazine
Posted by AshleyS at 1:17 PM 4 comments: 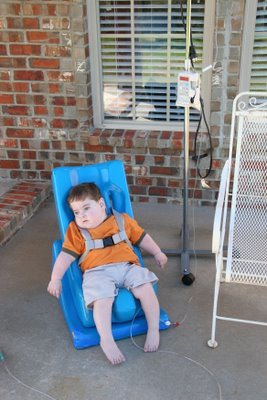 We got to sit outside today because it was absolutely beautiful! The temperature was great and the sun was shining. The only wild thing was that we were almost blown away by all the wind!!! It was a wonderful change since Clayton hasn't really been able to go anywhere lately--his lungs just aren't any better. He acts fine, but his oxygen levels aren't fine at all. He is still requiring way more oxygen than usual. He's at my parents' house tonight for a change of scenery. I can't wait until he's a little better so we can at least venture out a bit.
Posted by AshleyS at 8:26 PM 4 comments:

Nothing going on here except breathing treatments and chest physiotherapy. Also lots of necessary paperwork for Classy Scrapper Magazine--I love looking at everyone's submissions. Lots of inspiration for when I scrap myself!
Posted by AshleyS at 3:16 PM No comments:

Clayton has a small amount of atelectasis in his lower left lobe--small area of collapsed lung with some mucus to boot. His bloodwork was normal.
The doctor seems to agree with me and Brian that this was probably due to overstimulation and his seizure medication probably prevented another seizure, but his brain reacted in a different manner just by totally being lethargic in the breathing area. Goes along with the whole fact that he stops breathing totally during a seizure. Maybe we had a near miss??
He gave them a heck of a fight in radiology during the chest x-ray. I'm going to have to start bringing a team with me to help hold him still. I had to take the poor little guy to the restroom afterwards for a wipedown with a cool washcloth. He was so hot and mad and covered in sweat. So we have steriods for three days, CPT (chest physiotherapy), and lots of inhalers. FUN. FUN. I'm just so thankful we didn't end up staying at the hospital. I was not looking forward to that! THANK YOU FOR YOUR PRAYERS!!!
Posted by AshleyS at 11:42 AM 1 comment:

Yesterday, Clayton struggled all day long with his oxygen levels. I suppose he's just had way to much excitement with all the walking he's been doing. We are going to see the pulmonologist tomorrow morning for a chest x-ray and bloodwork to see if anything's going on. But in the meantime, when I got out of the shower this morning, he was lying in bed with his cannula off and he had a decent oxygen reading. WHAT'S UP WITH THAT? 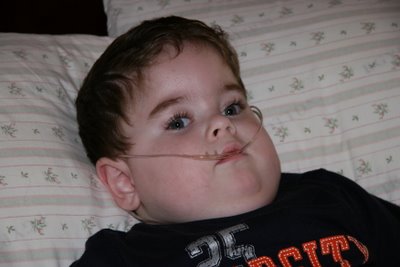 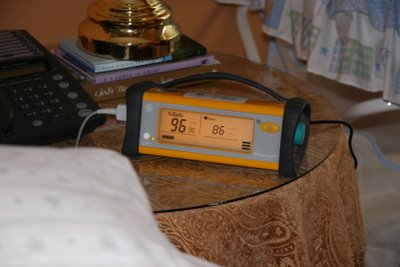 Talk about wishy-washy! There is never any rhyme or reason to what's going on with his lungs. All I know is he just can't deal with a lot of stimulation without having lots of down time afterwards. I suppose we'll just have to get used to taking life in spurts in order to keep his little body from overdoing it.
Posted by AshleyS at 1:30 PM 2 comments: 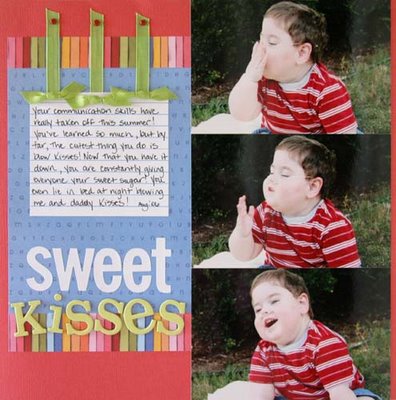 I actually got to scrap today! I already had most of this layout put together, but I added the ribbon as the finishing touch. I wish the pics were better, there's just no way to catch the full amount of cuteness when he blows a kiss!
Posted by AshleyS at 2:30 PM 5 comments:

Don't have much time to blog, but I realized I hadn't done so in a few days, so I thought I would check in. Everything's going well--Clayton's still a walkin' fool and Classy Scrapper is going full force! With that being said, I've got to get off here and go to work!!!
Posted by AshleyS at 3:33 PM 3 comments:

What Happened to Customer Service?

Well, I've spent the last 24 hours trying to print my business cards on my awesome Epson R1800 printer. We paid a pretty penny for that thing, and until yesterday, I've had not one complaint. For some reason it does not like these business cards. I've printed the documents on my other printers and it worked fine. But I keep getting the same paper source error everytime I try to print on the Epson. It's got the best quality of printing, so I really want to use it. So anyway, after trying everything I knew to do, I finally called Epson for help. And you know what they told me? That it would cost me $9.95 for them to troubleshoot for me and there was no guarantee they could fix the problem. WHAT?! What happened to helping a paying customer out with you product? I really can't believe they won't try to help you. I even explained the basics of the problem and he asked me again if I wanted to pay $9.95 for his help. Um, NO. I'll suppose I'll just hang out here to dry why you keep all your knowledge to yourself!
Posted by AshleyS at 1:35 PM 4 comments:

Well, with the latest manufacturing design team calls over, I suppose I can breathe a sigh of relief. When I applied for them, I only had the idea for Classy Scrapper Magazine, and had not plunged full force into my plans. As time went on and I started seriously working on the publication, I started to worry about actually getting picked for the Scenic Route team or the Piggy Tales team. It's definitely a blessing in disguise that I didn't get chosen, as it would have probably been a huge conflict of interest if my layouts for them ended up in other publications. But although I know it's a good thing, I still can't help but wonder what the heck was wrong with my work! These are two of the layouts I did for the SR call and I did my best to work with as much of their product as possible and I honestly took on the assignment as if I was already creating an ad layout for them. Guess that approach didn't work well. What the heck was wrong with these layouts? 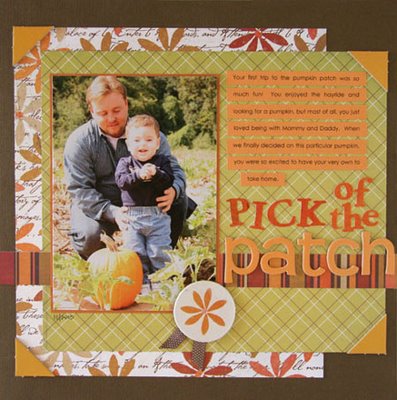 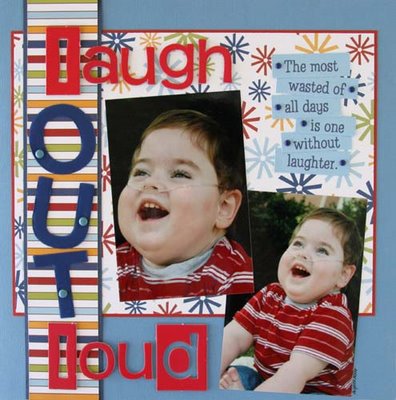 Oh well, I've got bigger fish to fry, as they say. Starting the magazine has actually been good for my scrapping. I'm wanting to scrap like mad, with no care for trying to achieve a certain look for getting published. I just want my pages to have good design, look great, and really record the memories for Clayton. Isn't that what it's all about anyway?
Posted by AshleyS at 12:22 PM 13 comments:

According to the GI doctor's scale, Clayton lost a little more weight. But he sure doesn't look like it, and he certainly doesn't feel like it! But considering he cries and screams and basically throws a fit while he's on the scale, that weight might not be accurate. The more important news is she has been researching a natural supplement that may help his lungs heal. Even though that's not her area of expertise, she's just as sick of the oxygen as we are. The pulmonologists are just giving us no answers and no specific plan. And his lungs aren't getting any better with growth, which is what they originally said would help them heal. Well, he's GROWN, but his lungs are still the same. And at this point, we are willing to try anything. Hopefully we can get that started soon, and maybe we'll see results even sooner!
Posted by AshleyS at 5:19 PM 2 comments: