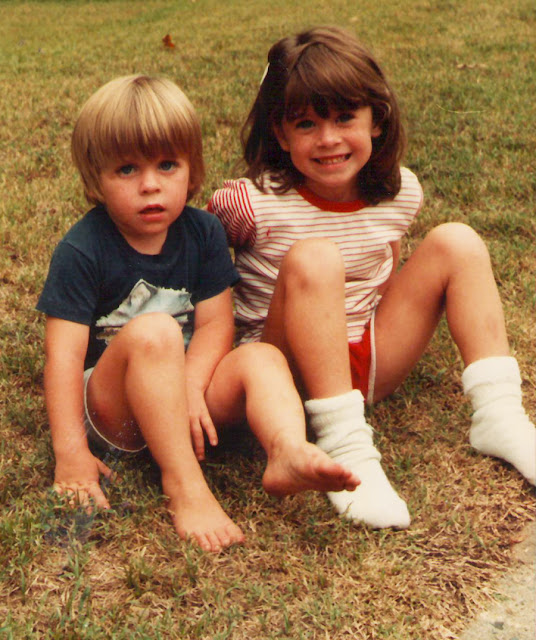 1980-something
My brother and I both didn't start singing publicly until our adult years.  And we didn't start singing together until just a couple of years ago.  We did a couple of ditties at his previous church and they went well, but never did I get emotional about it.
We sang together this past weekend and while I listened to my brother belt out his part, I couldn't help but get teary.  I don't know what the difference was this time--maybe a combination of things:  our families are closer than we've ever been; we now worship together at the same church home; a sweet spirit present while we were singing; and an awesome song with a simple, but very true message.  Whatever it was, I was nearly bursting with pride while listening to Josh sing his heart out.  Is the song technically perfect?  No.  We had a few minor hiccups that could be polished with more practice.  But I don't think those things even mattered, because the spirit of God was definitely present.

I couldn't ask for a sweeter time--singing with my brother while he and my husband play accompaniment.  I hope you enjoy listening as much as we love doing it.  :)  (And if you listen closely you can hear Clayton singing along as well!)
Posted by AshleyS at 12:00 AM 5 comments:

It's official!  Clayton is now the owner and driver of his very own power chair!  He has been looking forward to this day for so long, he was grinning from ear to ear the whole time the DME rep was here.  In fact he insisted on waiting by his window a full two hours before the rep was even scheduled to arrive  . . . he is definitely patient and persistent! 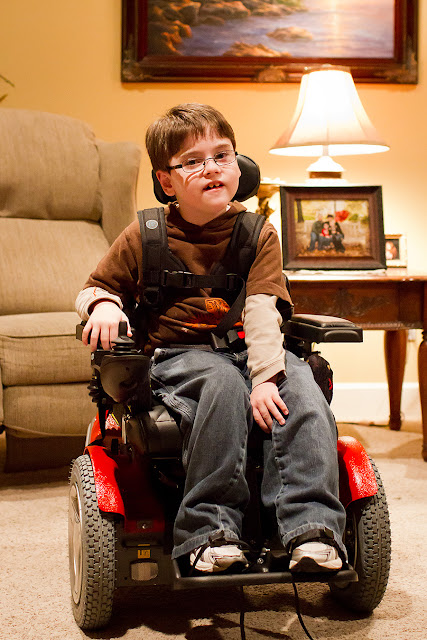 I was afraid he would forget all of his training in the loaner chair we had months ago, but he is already remembering to be careful and is doing his best to avoid the many obstacles in our house.  The toughest obstacle will be that one named Jackson, who has in fact forgotten all about the safety rules we had with the loaner chair.  He is going to require a breaking in period for sure since he can't help but explore the ins and outs of this machine with so many parts and gadgets attached.  I just hope we can keep him from losing a toe in the meantime!
We haven't even had the chair 24 hours, and Clayton is already the master of his own movements (what a freeing concept!).  He has been roaming around, digging through drawers and venturing to spots he normally doesn't get to go (my closet, for example).  And while it's a little cumbersome keeping him out of trouble, I say "go to it!"  It's about time he was able to explore his own home without someone else restricting his every move!
Posted by AshleyS at 12:00 AM 4 comments:

So have you heard about Amelia?  If not, her mother tells the latest in their story right here.
I have to admit that even though Clayton has never been deemed "mentally retarded," he is "developmentally delayed," and as a special needs parent, this scares me to death.  It's not a "big and bad" insurance company that's telling Amelia no to a life-saving operation.  It's the doctor(s) who is indeed charged with keeping her alive!  Please tell me I'm not the only one who sees the irony in this?
I couldn't put my finger on just why this rubbed me the wrong way (child needing a transplant put aside), but when I read Katy's post, I found myself nodding in agreement the whole way through.  I'm like her--I've seen a whole host of people in my life who were [supposedly] of normal intelligence whose "quality of life" wasn't near that of Clayton's!  Talk about someone who is living!  And he is enjoying every minute of it!  How many of us would be able to say we enjoy life as much as Clayton if we were suddenly limited by his disabilities?  I don't know if I could . . .
At any rate, as a parent of child with Cerebral Palsy, it is frightening what may lie ahead in the world of medical care and our ability to access it affordably.  Just another reason I'm praying diligently for a miracle in Clayton's health.

ETA:  I just read a few of the comments on Amelia's mom's post.  Had to stop.  Absolutely.  Incredible.  I was reminded that yes, some people really do feel like kids with any "defect" don't count and should be done away with as soon as possible!  God help them if they ever become the parent or grandparent of a child with disabilities.
Posted by AshleyS at 12:00 AM 2 comments: 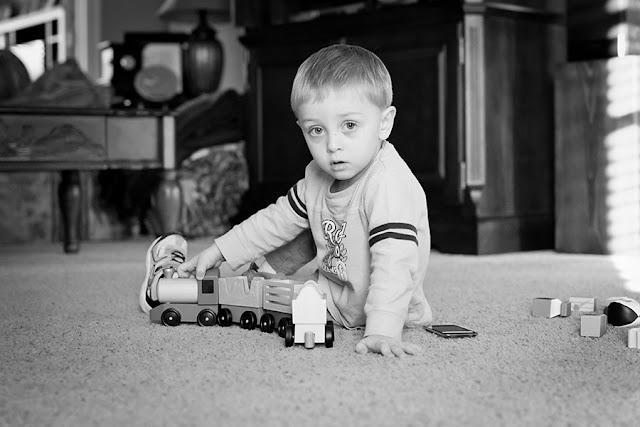 He says
"the camera?  again?"
I guess we all have our favorite toys.
Posted by AshleyS at 12:00 AM 2 comments:

Think He Doesn't Know? He KNOWS!

Clayton has recently rediscovered his iPad.  Or maybe I should put it this way:  Clayton can now play with his iPad without Jackson taking it away constantly.  (So glad that stage is over!)  There is one difference this time around though--he has discovered YouTube.  He used to just mess around with apps, email, and the web in general.  But now he's figured out he can go straight to YouTube and watch pretty much any Gaither song ever recorded. 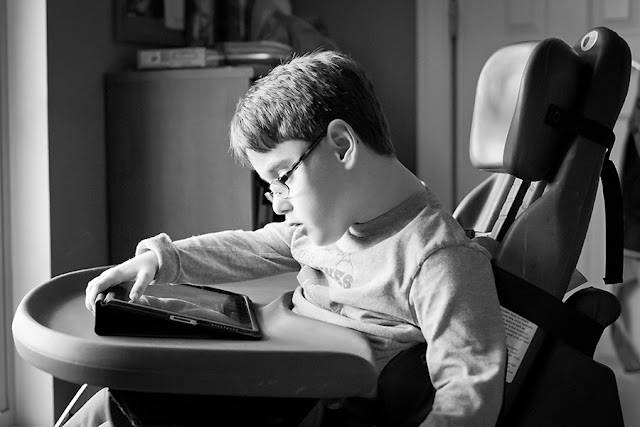 So yesterday morning, he was busy listening to a variety of songs (he is like his Uncle Josh, who never gets to the end of any song before moving onto the next one).  I heard the piano introduction to an old hymn I wasn't familiar with and then I heard Clayton immediately singing along with the words.  I didn't clue into the words at first, I was just wondering how he knew the song since it's not one we have on DVD, and as far as I know, he's never seen it on T.V.   Then I actually listened as he played the song a second time: 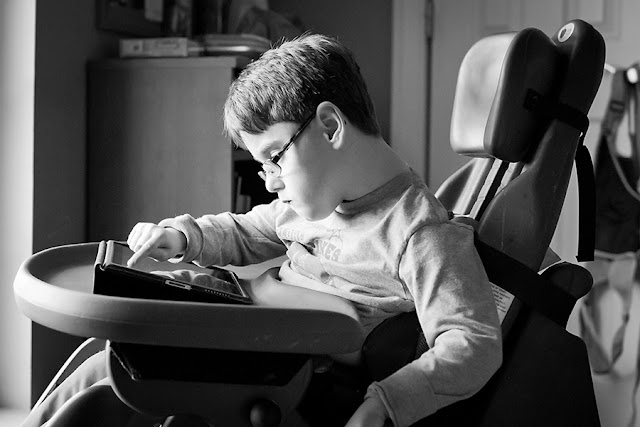 I don't know.  Maybe he's heard it with my mom.  But I don't know when since this is such an old taping.  And if he has, it couldn't have been but once or twice.  All I know is he knew exactly what that song was about and while many of the Gaither people in the video were having to use hymnals to remember the words, Clayton sang right along like he'd heard it a thousand times.

Clayton knows.  Clayton KNOWS!  He knows the promise that awaits him!!


But those who hope in the LORD
will renew their strength.

They will soar on wings like eagles;
they will run and not grow weary,
they will walk and not be faint!
Isaiah 40:31
Posted by AshleyS at 12:00 AM 7 comments:

"Faith is progressive.  Faith never gets into a bad situation and says, 'I'm just going to sit here and die.  It's over.'  Faith never stands in the desert, having a pity party with everything drying up around it.  You walk by faith.  You don't stand still, drowning in your misery.  When you get in a wilderness, you keep walking; you keep going forward even if you are only making an inch of progress with each step.  When you get into battles, you have to keep saying, 'I will move forward.'" ~Jentezen Franklin, "Fasting" 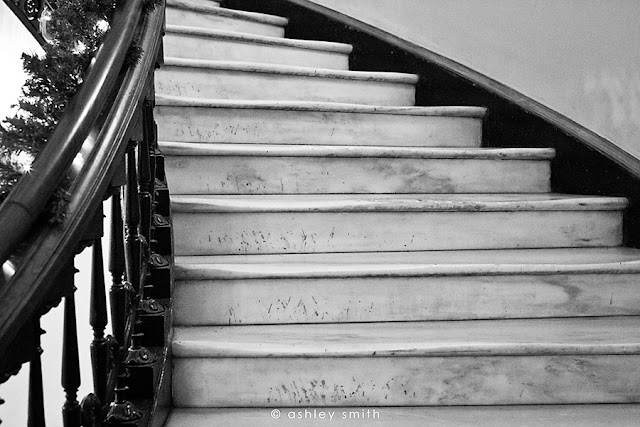 This passage resonated with me as I read this weekend.  I felt compelled to share it with my blog readers.  Thankfully, I am not in the "desert" at the moment.  But maybe someone out there needs to read these words today . . . just keep on keeping on--walk with and towards the Lord, and the reward will come.
These were all commended for their faith, yet none of them received what had been promised, since God had planned something better for us so that only together with us would they be made perfect.  Hebrews 11:39-40
Posted by AshleyS at 12:00 AM 1 comment:

Someone had a birthday this week, and for some reason he was feeling generous on that day . . . Brian never wants to pose for me, but as we spent a few hours out of town *alone* for his birthday this past weekend, he was in an agreeable mood! 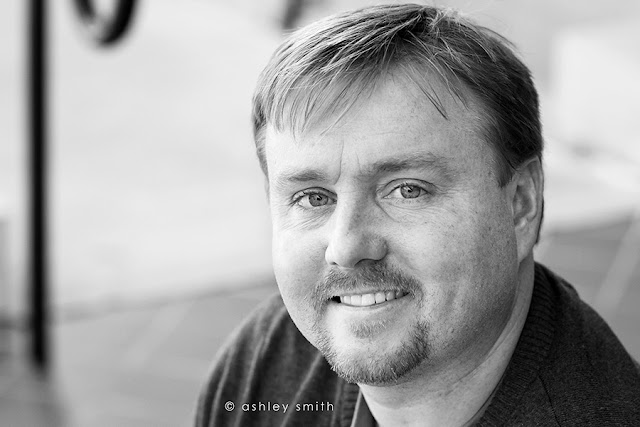 I'm just hoping he doesn't get too upset when he realizes I've posted it here.  I think those might have been his last words on the subject:  "be careful about posting those online . . ."  Well, honey, I'm being careful.  Careful to post a good one, that is!
So even though we celebrated his birthday, I walked away feeling like I'd received a gift too.  A willing model goes along way to make me happy these days!
Posted by AshleyS at 12:00 AM 2 comments: 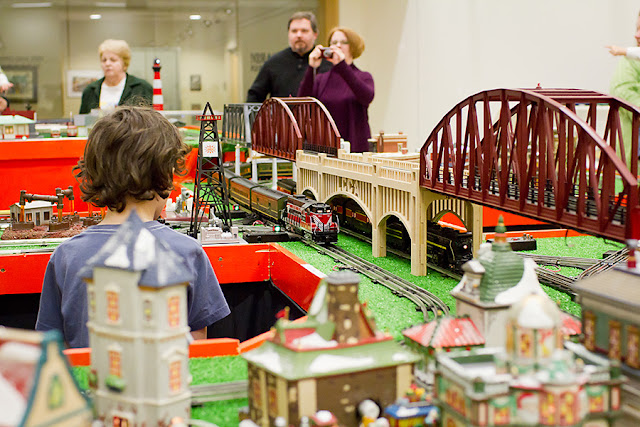 One of the nearby libraries hosted a model train exhibit over the holidays.  I'm not sure why people associate trains with Christmas, but for some reason, the two always go together!  We went with some friends of ours, and as usual all the kids were hypnotized by all of the inner workings of the models. 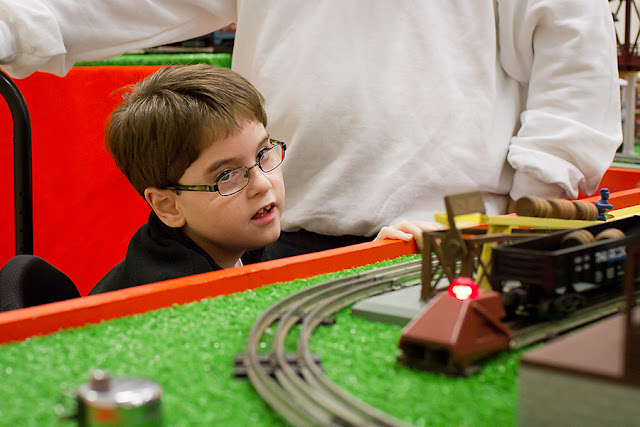 I call it the "train trance."  I see it a lot these days! 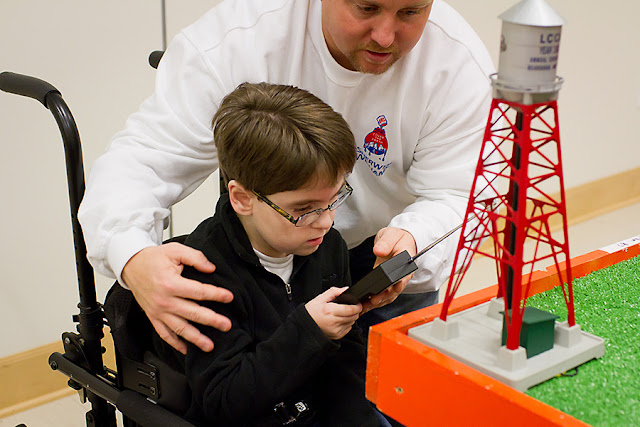 Loved that at this exhibit, the kids were allowed to work the controls. 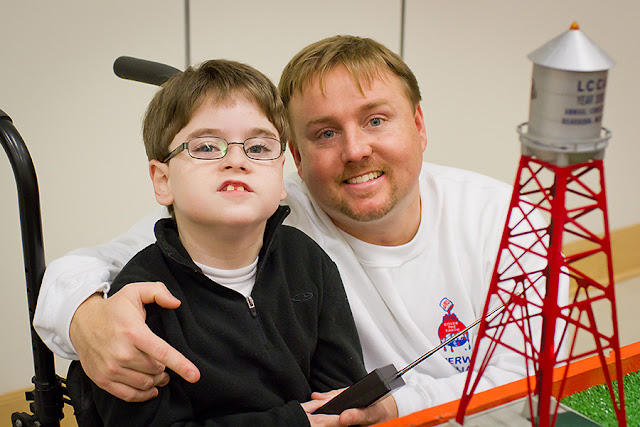 I just like looking at all the miniature stuff.  Almost makes me want to sit down with my brother and play with some Hot Wheels like we did as kids! See.  There it is again. 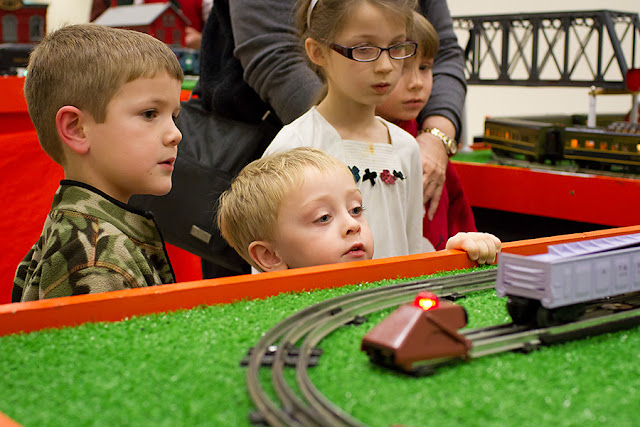