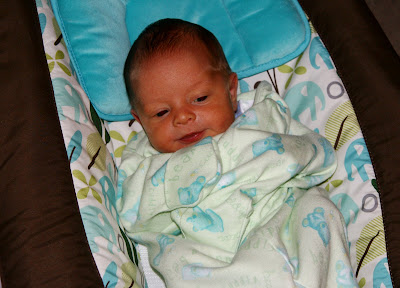 I was originally supposed to report to the hospital last Wednesday morning at 5:00 am. And when they called Tuesday night to tell me to wait until they called me due to overcrowding in Labor and Delivery, I started getting nervous. But a nurse did call about 7:00 am and we made our way to the hospital, not even really expecting a room since they had so many babies coming. But to our surprise we were led to our room right after check-in and the action began.

The doctor started me on pitocin and broke my water soon after I arrived. All seemed to be going well and my contractions slowly started getting stronger. Around noon, the doctor showed up because of some small signs of distress the baby was showing during contractions. Nothing serious she said, just enough to make her curious. She ended up attaching a monitor directly to his head to keep a close eye on him. And from then on, it was downhill. Jackson wasn't a big fan of contractions, and he sure didn't like a probe on his head! They ended up trying to replace my water (yes, there is such a procedure) in order to give the baby some floating room if he was pressing down on his cord. And even with that and with the pitocin turned off, Jackson continued to show signs of stress during the weaker contractions that I was having on my own. All of this hub-bub happened really fast and I got REALLY emotional even faster. The doctor had already said she wasn't going to tolerate much from me and the baby before she suggested a c-section, and after just that little bit of a scare, Brian and I were all on board for a section delivery. I just couldn't bear anything going wrong, so off we went to the operating room.
And as it turns out, the decision was a great one--little Jackson had his umbilical cord wrapped around his neck twice and as he moved down the birth canal, things would have just gotten worse. I'm so glad we didn't wait until it was a complete emergency! 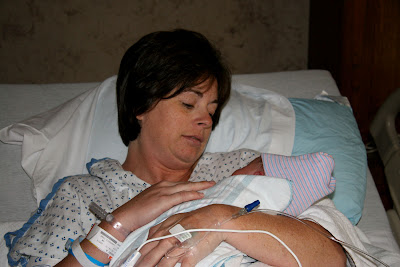 Jackson cried almost immediately and after hearing that cry, I was an absolute wreck!! I was laying on the operating table sobbing--it was such a blessing to hear my baby cry since I hadn't had that pleasure when the twins were born. I cried so much the doctor had to get on to me since she was busy trying to collect cord blood--I was shaking the whole table!!! When I realized I might mess up the cord blood banking, I sucked it up and did my best to keep the crying in check, but this momma was just so overwhelmed it was a hard feat to say the least!!!
And as far as my fears of recovery after another c-section, I have to say that this one has been MUCH, MUCH easier on me than the first. I'm still not my old self of course, but I'm getting around much easier than I thought I would be--the only bad part is I can't have ANYTHING to do with lifting Clayton and I hate it. Hopefully he won't remember and hold it against me!!
Jackson is perfect in every way. I'm so thankful God let us experience "normal" childbirth and blessed us with all these typical experiences that some might take for granted. Life is already so different, I can't wait to enjoy all the happiness this little guy is going to bring us!

Oh Ashley...he is so precious!Clayton looks to have taken up with him well. Sorry I haven't checked on you guys, we were out of town this wknd. Love you guys and so proud for you. We're bringing dinner on Sunday.

Awwww! What a wonderful, sweet story. God bless your little family, for sure!! I'm so happy for you guys. Can't wait to hear all the stories and see all the pictures.

He is just so beautiful Ashley! I am so glad you kept it together enough to collect the cord blood!! You just never know what they may be able to do with that!! :) I am so very happy for you and Brian and Clayton...if anyone is deserving of great happiness it is you guys!

Wherever HE Leads We'll Go said...

He is so beautiful! I am so glad that the delivery went well (after the little scare). I can totally understand your sobbing at hearing him cry. I didn't get to hear that with my daughter either - so I am sure it brought up a lot of those old emotions. Hope your recovery continues to go well and that you all are adjusting well.

Great story and good call on the c-section. Sometimes you gotta do it their way!

I can't even put into words how happy I am! He is BEAUTIFUL!!!!

he is so beautiful Ashley. Glad you both are doing well and improving every day! Can't wait to hear and see more!

Ashley! As I read this tears come in my eyes!! I am so happy for you guys!! it seemed so normal for you guys the other night!! please let me know if you need anything!!! I a minute away!! Aunt J

Congratulations to you, Brian and Clayton. He is gorgeous Ashley! Many blessings and happiness for you all!

Hi Ashley:
Spoke with Lowell last night,he was telling me about your web page.
It is so exciting seeing pictures of Clayton and Jackson.
Hope you will be able to attend the Family Reunion in Douglas.
I've really enjoyed reading about the family.
Love Ya,
Marcia in Orlando